Graphene: Another Option for Energy Harvesting?

Is graphene turning out to be one of the amazingly versatile elemental substances—somewhat like silicon—that shows up in many guises and potentially solves many unique problems? Only time will tell, but the signs right now are favorable.

First, a quick background on graphene. It’s a one-atom thick layer of carbon atoms arranged in a two-dimensional hexagonal lattice. Graphene is thus the thinnest material known, yet incredibly strong (about 200X stronger than steel). It’s an excellent conductor of heat and electricity and has interesting light-absorption abilities. The material was isolated and characterized in 2004 by Andre Geim and Konstantin Novoselov at the University of Manchester, who were awarded the Nobel Prize in Physics in 2010 for their research on the material.

Now, two unrelated research efforts are showing how it may be useful in energy harvesting. First, a team of University of Arkansas physicists has successfully developed a circuit capable of capturing graphene’s thermal motion and converting it into an electrical current. The idea of harvesting energy from graphene is controversial because it counters legendary physicist Richard Feynman’s assertion that the thermal motion of atoms its—known as Brownian motion – cannot do work.

However, according to Paul Thibado, professor of physics and lead researcher, the thermal motion of graphene does in fact induce an alternating current (ac) in a circuit at room temperature, an achievement thought to be impossible. His group built their circuit with two diodes for converting ac into dc, thus allowing the current to flow both ways and providing separate paths through the circuit to yield a pulsing dc current that performs work on a load resistor (Fig. 1). 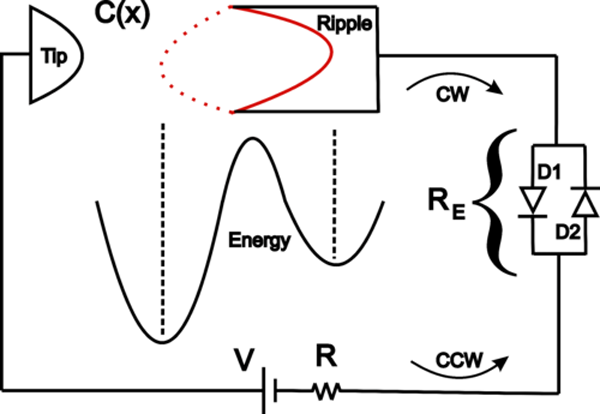 1. This sketch of a circuit model with the energy-barrier diagram is a simplistic representation of the deep physics underlying the principle of graphene-based harvesting. (Source: University of Arkansas)

Numerical simulations show that the system reaches thermal equilibrium and the average rates of heat and work provided by stochastic thermodynamics tend to quickly go to zero. However, power is dissipated by the load resistor, and its time average is exactly equal to the power supplied by the thermal bath. The exact power formula is similar to Nyquist’s noise power formula, except that the rate of change of diode resistance significantly boosts the output power, and the movement of the graphene shifts the power spectrum to lower frequencies.

In their arrangement, graphene ﬁlm was mounted on standoﬀs so that a scanning tunneling microscope (STM) tip can approach it, with the STM tip-sample junction incorporated into the circuit shown (Fig. 2). The sample is isolated from ground and connected to two diodes; the tip-sample junction acts as a variable capacitor. The tunneling current, diode 1 current (D1C), and diode 2 current (D2C) are monitored simultaneously. 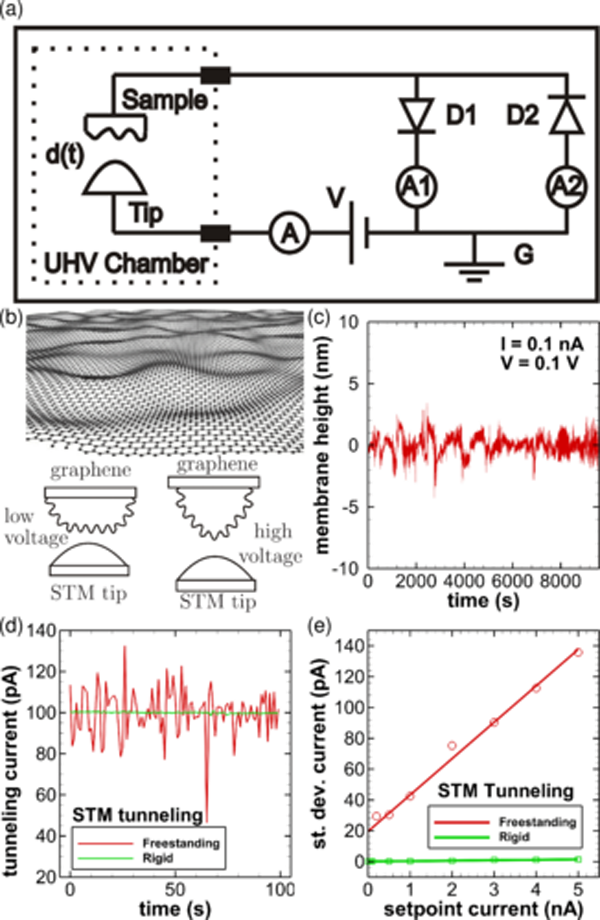 This diode arrangement is used for energy harvesting, but here it’s used to isolate the graphene-induced current from the battery powering the electrically isolated STM. At a tip-sample distance of 2 nm or less, tunneling electrons dominate the current; for larger distances, displacement current dominates.

Obviously, this work involves intense and deep physics, and is explained in their paper “Fluctuation-induced current from freestanding graphene” published in APS Physical Review E. It’s behind a paywall but is also posted here (there’s also a short simplistic video animation here).

Frankly, there’s some leap of faith required here despite the full analysis in published paper, especially since Prof. Thibado also promotes their research with optimistic statements such as “An energy-harvesting circuit based on graphene could be incorporated into a chip to provide clean, limitless, low-voltage power for small devices or sensors.” But you never know—and should “never say never” when it comes to physics and technology advances.

In an unrelated development, a team at the Materials Research Laboratory at the Massachusetts Institute of Technology (MIT) has conceived of a way to harvest RF energy ranging from microwaves to the terahertz band. The analysis looks at the physics and presumed limitations of the quantum-mechanical behavior of graphene, and ways to overcome them. They found that by combining graphene with another material—in this case, boron nitride—the electrons in graphene should skew their motion toward a common direction, thus yielding current flow.

While previous experimental technologies have been able to convert terahertz waves into dc, they could do so only at ultracold temperatures, which obviously limits their practical applications. Instead, lead researcher Hiroki Isobe began an investigation to see if a material’s own electrons could be induced at a quantum-mechanical level to flow in one direction, in order to steer incoming electromagnetic-energy waves into a dc current. The material used would have to be free of impurities so that the electrons in it would flow without scattering off irregularities in the material, and graphene was an attractive material.

But that was only the starting point. To direct graphene’s electrons to flow in one direction required “breaking” the material’s inherent symmetry. Thus, the electrons would feel an equal force in all directions, meaning that any incoming energy would scatter randomly. Others had experimented with graphene by placing it atop a layer of boron nitride such that the forces between graphene’s electrons were knocked out of balance—electrons closer to boron felt one force while those electrons closer to nitrogen experienced a different pull.

This “skew scattering” can result in useful current flow. The research team envisioned a terahertz rectifier consisting of a small square of graphene sitting on top of a layer of boron nitride. It would be sandwiched within an antenna that collects and concentrates ambient terahertz radiation, boosting its signal enough to convert it into a dc current (Fig. 3). 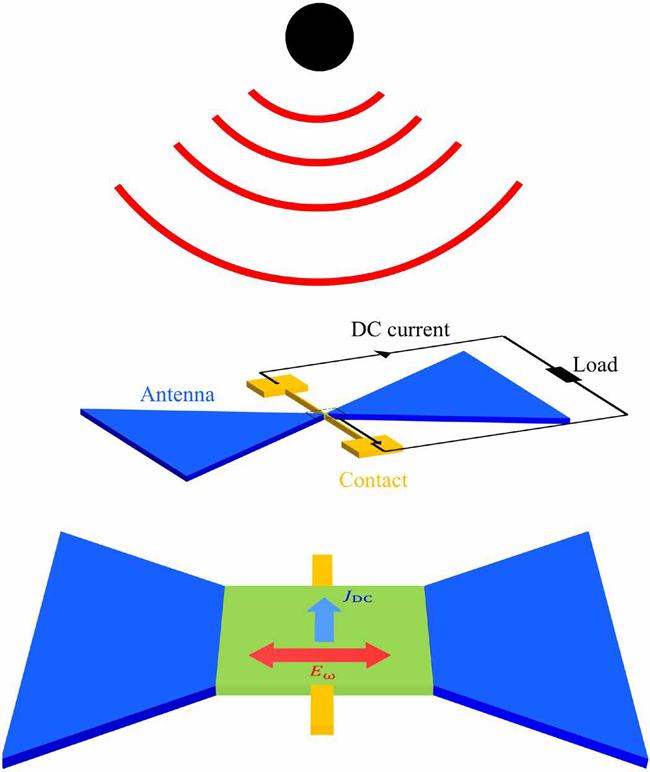 3. Schematic figure of a rectifier based on a 2D material. In this setup, the rectified dc current is detected transverse to the incident electric field, which is advantageous in reducing noise. The antenna is attached to both sides to collect more power from radiation and enhance the sensitivity. (Source: Massachusetts Institute of Technology)

The team has filed a patent for their new “high-frequency rectification” design, which is described in the their Science Advances paper “High-frequency rectification via chiral Bloch electrons” along with Supplementary Material. It takes quite a bit of reading of both to realize that this is an extremely in-depth theoretical analysis only (and I do mean in-depth, as the number of models, equations, partial derivatives, and integrals is astounding). No device has actually been built. But not to worry—the researchers are working with experimental physicists at MIT to develop a physical device based on their insight and analysis.